What is Halal in Islam?

Halal is an Arabic term that means permissible or legal. So, it is the nutritional norm, as prescribed in the Qur’an, in terms of food (the Muslim scripture). Haram, which means illegal or forbidden, is the total opposite of halal. So, halal and haram are words that can be applied to any aspect of life. Health products, meat products, cosmetics, personal care products, pharmaceuticals, food additives, and food touch materials are all examples of these concepts. While certain things are obviously halal or haram, so there are a few things that aren’t.

So, in Islam, all foods are known as halal unless they are specifically forbidden by the Quran or Hadith. Halal foods, according to the official definition, are those which are:

So, Muslims eat to keep their bodies solid and stable so that they can devote their experience and commitment to the betterment of society. Muslims are expected to make an attempt to achieve the highest food level possible. In a Hadith, it is mentioned that Allah would deny a person’s prayer if the food is eaten is forbidden (haram). So, except for the following (which are haram), all ingredients are considered halal:

Muslims are only permitted to consume meat cooked in accordance with Islamic law. So, animal rights campaigners also criticize this approach as “causing undue pain to the animal.” Muslims deny, claiming that Islamic law on animal slaughter is intended to alleviate the animal’s suffering and discomfort. The Islamic law of slaughter animals that are halal are given below:

“Do not eat that (meat) over which the name of Allah has not been pronounced. This is surely a sin. The satans inspire their friends to dispute with you. If you were to obey them, you would be Mushriks. (6:121)”

O you who believe, fulfill the contracts. The animals from the cattle have been made lawful for you, except that which shall be read over to you, provided that you do not treat hunting as lawful while you are in IHrām. Surely, Allah ordains what He wills. (5: 4) 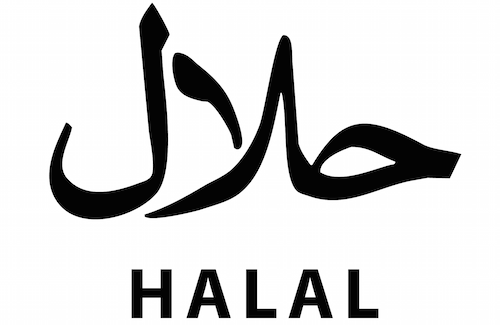